Use image links below to view Steve's TR-1s

Personal Electronic Device colors in 2005 had the look of 1954...READ MORE

The black TR-1G shown above is part of the Smithsonian Institution's collection of TR-1s at https://americanhistory.si.edu/collections/search/object/nmah_1817324

The serial #2 Regency TR-1 was presented to Ed Tudor, Regency's President during the development of the TR-1. [click to read background information and view additional images of this radio].

The TR-1's 50th Anniversary was celebrated AROUND THE WORLD. In the UK, the BBC featured TR-1 expert Steve Reyer and UK radio historian Enrico Tedeschi in a radio interview; in the U.S., NPR's Science Friday program featured Robert Simcoe, author of "The Revolution in Your Pocket"; and in Australia, www.regencytr1.com creator Don Pies was interviewed on live Sydney talk radio station 2UE. Sydney continues to celebrate the Regency TR-1 with a display at the Museum of Applied Arts & Sciences Powerhouse Museum with curator Geoff Barker's collection, and with a mahogany TR-1 viewed by Matt Pies in 2015.

The seven transistor Regency TR-7 (above) was a perfect companion for picnics and play time. The handle rotated into a locked position behind the radio which allowed you to tip the radio speaker upwards. The 1958 radio shown in this photo still puts out a great sound.

Also ready for a beach party was the picnic portable Regency TR-5C (below) from the late 1950s. Before singer/song writer Jack Johnson became popular, he taught surfing at the Campus Point surf break, located at the top of this photo near Santa Barbara. The ad below the photo appeared in Holiday Magazine. 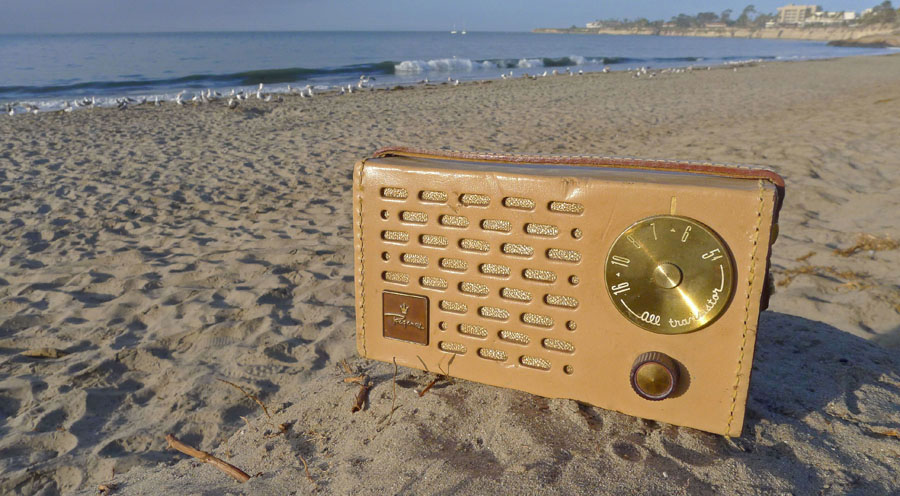 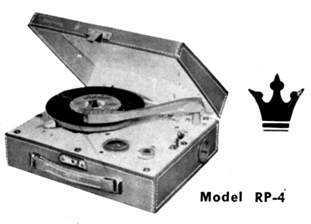 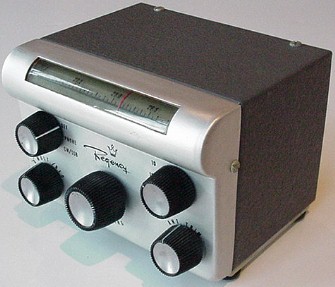 more IDEA-Regency artifacts
Artifacts from IDEA-Regency co-founder, Joe Weaver, are on display at the Southwest Museum of Engineering, Communications and Computation in Glendale, Arizona.

End of the Early I.D.E.A./Regency Years

Although Japanese competition squeezed Regency out of the portable radio business in the early 1960's, the company's Monitoradio Division prospered. This division was formed in the early 1950's and built FM, VHF and UHF emergency frequency band receivers. When I.D.E.A. Inc became Regency Electronics Inc in 1961, the communication receiver business was growing at a 15% rate annually. By 1964, Regency's total sales had grown to 2.7 million dollars.

The Police Alarm PR-9/74 shown on the left was one of I.D.E.A./Monitoradio's early products (ref: tuning range 72mc-76mc, PR-9 range was 152mc-174mc). After 1961, Monitoradios were sold under the Regency Electronics label. The MR-33B on the right was one of Regency's final products with vacuum tubes.

Regency became RELM Communications in 1989, and as of 2020, BK Technologies has carried Regency's legacy forward in the radio business. The 1991 Annual Report featured the TR-1 on the company's 55th anniversary.