The Regency TR-1 story, based on an interview with Regency co-founder, John Pies (partner with Joe Weaver)

THE DASH TO BE FIRST
Raytheon, Regency-TI and the unknown Tokyo Tsushin Kogyo company from Japan fiercely sprinted to have the first transistor radio on the consumer market. The Regency-TI team reached the mark in October 1954 with its pocket radio, while Raytheon crossed the finish line the following year with a picnic portable version, and Tokyo Tsushin Kogyo finished shortly thereafter, also with a picnic portable radio. Getting a transistor radio on the mass market for the third company was an important milestone to help Japan's suffering post WWII economy and self-image. This company finally changed its name so Americans could pronounce it...the new name became Sony.

ALL DRESSED UP AND NO WHERE TO GO
That's how Texas Instruments felt in early 1954 with a germanium junction transistor in hand, and no major radio builders willing to put it in their products. Even though Raytheon had succeeded with the first mass produced transistor the previous year, RCA, Sylvania and Philco were not ready to adopt the novel transistor. But this changed in June when TI inked a joint venture with Regency to get a radio into high volume production for the Christmas market.

WHAT PUT THE TR-1 IN FRONT
Prototype transistor radios built prior to the TR-1 required manually selecting and matching electrical components to make them work, which in turn drove prohibitive cost per unit for large scale production. Regency's master engineer, Dick Koch, opened the door to the TR-1's success by designing a feedback circuit that accommodated the tolerance of production run components and let them be soldered directly into the boards without manual selection. This proved to be the right answer, and 140,000 TR-1's poured off the production line.

BACK THEN, LOOKING FORWARD

IBM CEO, Thomas J. Watson, Jr, saw transistors as the future of computers, and ordered that IBM build no more machines with tubes after June 1, 1958. But his designers had been reluctant to embrace the new technology. Watson bought and handed out numerous Regency TR-1's to set an example for IBM employees. Whenever engineers complained to Watson about the decision, he just gave them a TR-1.

Steve Wozniak quote: "My first transistor radio...I loved what it could do, it brought me music, it opened my world up"

Bill Gates quote: "Without the invention of the transistor, I'm quite sure that the PC would not exist as we know it today"

PHYSICS TODAY book review of CRYSTAL FIRE, the history of the transistor: "....the story not only of one of the greatest inventions of the 20th century but of the birth of the information age."

FORTUNE magazine quote: "For perspective, remember that the transistor, arguably the most important invention of the 20th century, came out of Bell Labs in the late 1940s as a clunky device of wire, gold foil, glue, and other components. The first transistorized consumer product, the Regency TR-1 radio, went on sale Oct. 18, 1954, and sold out almost immediately. If you owned one, you were the coolest thing on two legs."

CRYSTAL FIRE by Michael Riordan and Lillian Hoddeson document the invention of the transistor and the industry it created. "[Riordan and Hoddeson] deploy their skills to untangle this fascinating history. Their very readable account describes the technical issues surrounding the transistor's creation and the colorful characters involved." - San Francisco Chronicle

The PORTABLE RADIO in AMERICAN LIFE by Michael Brian Schiffer documents the history of portable radios and the radio's impact on the pop culture.

In 2002, "Boy's Toys" week on the History Channel featured a six minute spot about the invention of the transistor and showed some of the first transistor radios. This program, named MORE GADGETS, is part of the Modern Marvels series. The TR-1, ".....a stunningly small radio that would kick off the revolution of high tech miniaturization", the Raytheon 8TP-4 (second commercially available transistor radio), and other stylish radio designs of the time are highlighted.

"TRANSISTORIZED" sponsored by PBS. Intriguing one-hour TV special hosted by Science Friday's Ira Flatow - a must see show. The program was heavily endowed by several foundations as an educational and entertaining experience.

View an excerpt from this PBS special covering the transistor radio's impact on rock & roll and introduction to the information age; and how the Regency TR-1 beat Sony to be the first on the market.

Click to view the entire program on YouTube. The full-length program was broken into six short video segments: view each segment at 1of6, 2of6, 3of6, 4of6, 5of6, 6of6 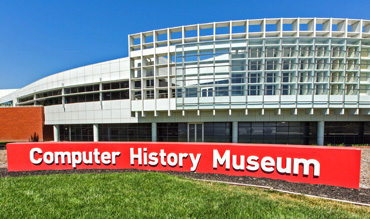 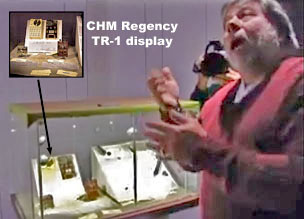 Computer History Museum, Mountain View, California - The museum's collection holds more than 100,000 items in 25,000 square feet, including an ivory Regency TR-1 displayed in the museum's "Inventing the Transistor" display area. Leading up to the exhibit's opening in January 2011, Apple co-founder Steve Wozniak appeared at the CHM to talk about some of the products and people that inspired him to create the first Apple computer. Included in Wozniak's EIGHT KEY MACHINES "that have led to the Facebooks, smartphones, and PlayStations of today", was the Regency TR-1. Ref. CNET article by Scott Ard

As quoted from WIRED'S online article by Jonathan Snyder and Brian X. Chen in reference to the CHM Regency TR-1, "…Repeating a phrase that he used several times during the tour, Steve Wozniak said without this technology, portable media players would never have come into existence — and without that, we wouldn't have iPhones today"

In 2011, the History Channel aired 101 GADGETS THAT CHANGED THE WORLD; and the transistor radio fell within the golden top 20 gadgets. In this program, Rock 'n Roll Hall of Fame artist Roger McGuinn of The Byrds describes how the transistor radio inspired him into Rock music. CLICK to view more information about McGinn's Regency TR-1G and his introduction into this new form of music.

In 2012, The PBS History Detectives searched for the oldest Regency TR-1 that still existed at that time. Hosted by Tukufu Zuberi, TR-1 experts were called-in, including Steve Reyer as a consultant, and those who appearded on the show - Eric Wrobbel, Don Pies (son of Regency co-founder John Pies) and Clay Tudor (son of Regency President Ed Tudor). View the short episode preview, or watch the Full Episode. Ref: History Detectives Transistor Radio, Season 10 Regency TR-1 starts at 28:45

Eric Wrobbel's "The Regency TR-1 Family" booklet describes the subtle variations in the TR-1 that depended on production date, contrasts differences between radio models within the Regency TR family, and illustrates many other pictures. Visit Eric's extensive website at http://www.ericwrobbel.com

Regency Owner's Manual. 1.1 Mb PDF document scanned from an original copy. This manual is the same for the TR-1 & TR-1G, with the exception that for the earliest TR-1s, there was no coin slot. WARNING: DO NOT use a coin to help open today's vintage Regency radios - instead, visit Steve Reyer's how-to take off the back. Also, visit Steve's comprehensive repair section titled "Repairing a Regency TR-1 -- my experiences". On page 3 of the owner's manual, instructions are given regarding what to do "In the event of an enemy attack...". Visit Duck and Cover for additional instructions.

The 2004 fall issue of AMERICAN HERITAGE's INVENTION & TECHNOLOGY (vol. 20, #2) celebrated the 50th Anniversary of the Regency TR-1 in an article titled "The Revolution in Your Pocket". Veteran semiconductor device designer Robert J. Simcoe documents the challenges that had to be overcome to bring the "laboratory" transistor, the not yet invented transistor radio circuitry, and the manufacturing of miniature discrete components into reality. An excellent article that captures the historic significance of the TR-1 and how industry met the challenge.

EE TIMES magazine, October 30, 1997 issue published a comprehensive series of articles that documented the 50-year evolution of the transistor and its impact on the electronics industry. The first transistor radio was discussed in the article titled "A Radio and Silicon" by George Rostky.

The Smithsonian Institution online magazine payed tribute to the portable electronics age in an article by Joseph Stromberg in 2011, and celebrated the Regency TR-1 60th anniversary in an article by Cari Romm in 2014.

Steve Wozniak discusses his affinity for transistor radios and his lifetime love for gadgets in a worth reading interview by Billy Steel. Quote Wozniak "My first transistor radio was the heart of my gadget love today". This compassion is further elaborated upon in Forbes article by Jon Bruner titled "Steve Wozniak's Favorite Gadget" .